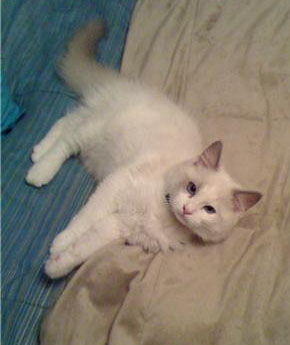 This is Enzo, a favorite brother of our very own Schuyler, pictured a few weeks shy of four months old. He lives with his new family in Monterrey Mexico!

“I just wanted to send you some pictures of Enzo, I’ll send you more when he’s 6 months old, he’s been doing great! He loves my dog, and my dog loves him back, he’s always at the door looking through the glass to see my dog, it’s hilarious, because he actually crashes into the glass, because he wants to go out to play with her, I’ll send you some pictures of them together as well, he’s also such a cute boy, he sleeps with me everyday, if he doesn’t he starts meowing. We do love him so much, he’s such a handsome cat.”

Thank you, Ileana, for loving Enzo so much!