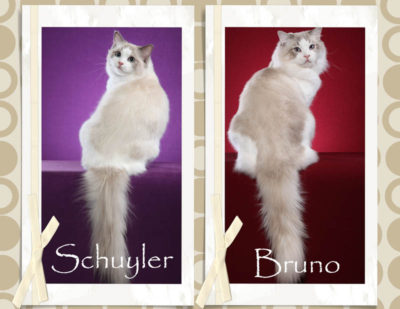 RW QGC RegencyRags My Lady Delight and SGC RegencyRags Bravo Delighted Artiste – While going through Bruno’s brand new set of professional photos taken by Helmi, I realized I had these
beautiful mirrored images of both Schuyler and her brother, Bruno and that both were taken by Helmi.
I just had to feature these two beauties side by side. Schuyler’s photo was taken at 9 months old and Bruno’s
at 1 y 3 m. It’s amazing to me how much Schuye looks like Aristede and Bruno looks like Daphne. But you can
see they have the exact same body type. Schuye is a blue pt bicolor Ragdoll and Bruno is a blue lynx pt. bicolor Ragdoll.
I just love that I have a mirrored set of Daphne’s super stars!